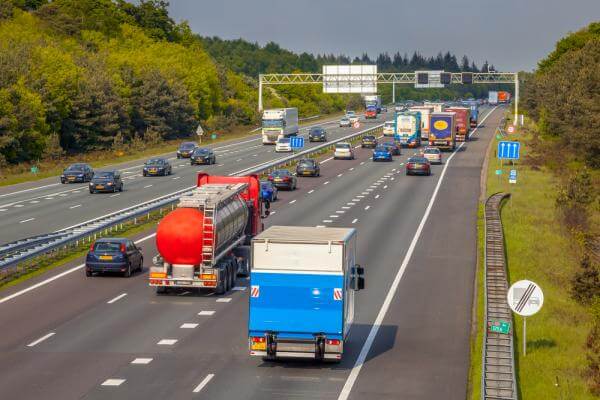 As building works begin on M60, the Government announces a safety campaign to keep workers safe by using photographs of their children with the warning ‘My daddy works here’.

Photos of children whose mums and dads are working on the motorway are being used on signs behind the safety barriers to remind workers of the importance of safety, and motorists are also being urged to think about the people behind the cones when they drive through the roadworks.

Nearly 300 people are currently working on a 17-mile stretch of motorway between junction 8 of the M60 near Sale and junction 20 of the M62 near Rochdale, as part of a Highways England scheme to tackle congestion and improve journey times.

New technology is being installed to monitor traffic levels and variable speed limits will be used to improve the flow of vehicles when the project is finished. The hard shoulder is also being permanently converted into an extra lane between junctions 18 and 20 of the M62, increasing capacity between the North West and Yorkshire.

Narrow lanes and a temporary 50mph speed limit are currently in place along the route for the safety of workers and drivers, and so far over half a million hours of work have been carried out without any injuries.

The new signs feature three children whose parents work on the motorway, warning ‘My mummy works here’ or ‘My daddy works here’ alongside the message ‘Take care within the roadworks’.

Paul Hancock, team leader on the project and whose five year old son is used in the campaign, commented on how the safety warning could affect the workers’ safety.

‘Joseph describes my job as building a motorway so he was really excited to have his photo taken for the safety campaign. We’ll have to see what he makes of it when he sees his face on a sign at the side of the road.

I hope the campaign will encourage people to think more about the workers behind the barriers, as well as reminding us to remain focused on safety while we’re on the motorway.

Even with the reduced speed limit, it still feels fast when you’ve got thousands of vehicles zooming past you so I’d definitely urge people to stick to the temporary limit when they’re travelling through the roadworks.’

‘This is one of the biggest construction projects currently taking place in the region so it’s vital we do all we can to make sure both workers and drivers stay safe. Paul is one of the hundreds of workers involved in the scheme whose friends and family want to see them come home safely every day.

I hope the new campaign will encourage people to think more about the workers behind the barriers who are carrying out the work on the smart motorway scheme, so we can reach the end of the project without anyone being injured.’

When the smart motorway scheme is completed in autumn 2017, around 200 new electronic message signs on overhead gantries will warn drivers of changes in the mandatory speed limit, lane closures and incidents ahead.