“What Happens Now is Nothing to do with Me” 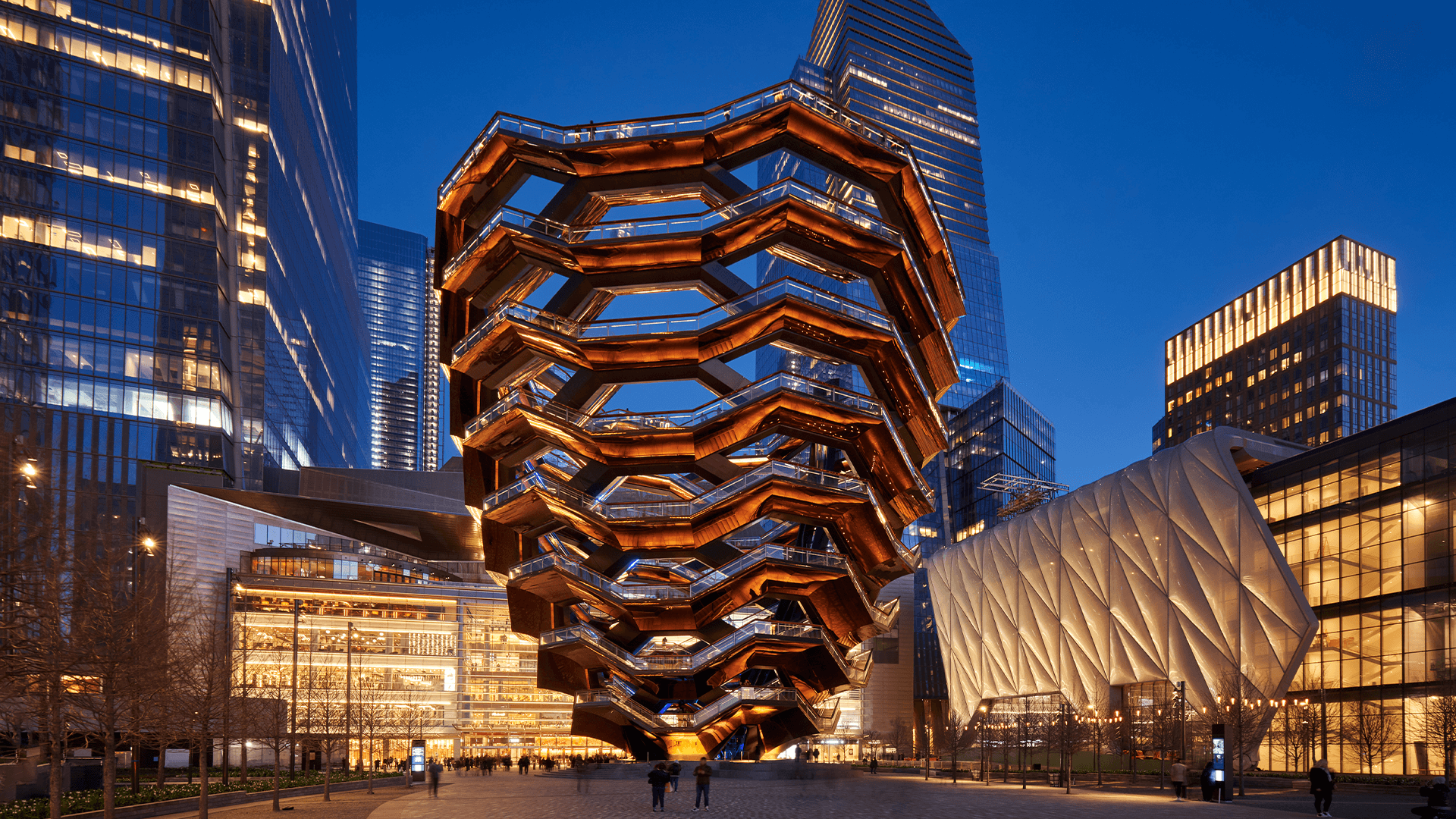 The above title, more than just turn of phrase, is a quote from London designer Thomas Heatherwick upon the unveiling of ‘the Vessel’ in New York. Having become one of the most talked-about and controversial pieces of blue-chip art in the world thanks the dark side of this combination architectural experiment, public sculpture, and luxury eye candy, the Vessel has become the centre of discussions regarding architectural experts’ duty of care. When one creates a concept, realises a design, and begins to bring it to life, what – if anything – is the investor, designer and builder responsible for regarding how people use it later?

Since its unveiling on March 15th in 2019, the Vessel has been the site of no less than four deaths. Commissioned by Stephen Ross and Michael Bloomberg from designer Thomas Heatherwick as part of luxury multi-use-space Hudson Yards, this sculpture can be found on the far west side of Manhattan, and has been ‘temporarily closed’ since summer of last year after a 14-year-old boy died by suicide at the Vessel. Indeed, this $250 million dollar project was erected to be a ‘gift to the city’ from Ross himself. But it did not pan out this way. With 16 staircases of metal and glass – inspired by ancient Indian stepwells like those found at Chand Boari to bring water to arid regions – the Vessel’s reception to the New York skyline was one of conflict, with some lauding its design as ‘thrilling’ with its high walkways and view of the Manhattan skyline; and others condemning it as ‘unnerving’ and ‘utterly inaccessible.’

The latter certainly isn’t helped by the fact that the Vessel is entirely a physical experience. In fact, Heatherwick himself described it as an experience of ‘properly using your physicality’ even whilst touting that the Vessel was for everyone, all citizens of New York, implying that all citizens of New York are able bodied and able to contend with not just stairs in general, but the huge amount of them in the Vessel. There is a lift, but it takes the person all the way to the top; not exactly allowing them to experience the ‘journey’ part of the artwork that the designers so wanted guests to partake in.

And then the deaths began. Tragedy struck for the first time on February 1st in 2020, when the first person jumped from the vessel, and then again in December of 2020, and January of 2021; after this, the Vessel was closed, and the minds behind it clubbed together to reply to the backlash and attempt to find a solution. However, said discussions were heavily marred by discussions of wanting to ‘retain artistic integrity’. Even though strategies were implemented such as a ten-dollar entry fee to the previously free artwork, a buddy system being enforced, suicide prevention hotline signage being posted, and even the introduction of security personnel, the idea of simply putting in railings higher than waist height was considered the sticking point. The reason for this? Fear of damaging the views and the experience. This, ostensibly, throws the quote in the title of this article into a sharp new light, and brings up an important topic for discussion: when one designs a public structure, is it really ‘nothing to do with you’ what happens after it is complete? Is it the fault of the designer if tragedies occur as a result of their emphasis more on artistic vision than user safety?

As Caitlyn Doughty from Ask a Mortician asks in her video on the subject, ‘what is [a designer’s] ethical duty through design choices to prevent such things from happening?’ With the Vessel being simply one piece of art nestled in the ‘museum of art’ sector of Hudson Yards, it stands as a testament to what happens when one views their role as a creator as totally separate from the results of people being allowed to interact with that creation; and it isn’t alone. Many great architectural features before it where aesthetics have prevailed over the safeguarding of human life have become similar hotspots for self-harm, such as the Golden Gate Bridge and the Elmer Holmes Bobst library at NYU, but both structures have addressed their issue regarding self-harm in different ways that can be compared for effectiveness both in harm prevention and retention of artistic integrity.

With the Golden Gate Bridge, the railings were not designed for the safety of the crosser, but so that the designer could see over the top of them comfortably. Due to this one design choice, the Golden Gate Bridge has become a hotspot for self-harm, so much so that with 625 officially reported deaths and perhaps over 200 that have gone unseen and unreported, it is no wonder the construction has come under fire. Indeed, It became one of the first architectural marvels to inspire this discussion of ethical duty in architecture, as even in the face of all this death people still worry about obscuring the views and ‘experience’.

However, it seems that in the case of Golden Gate, the side of the argument saying that yes, a designer and construction team do have a duty of care, are winning. Suicide prevention nets have been in the works for years now, slated for completion in 2023; whilst this for many is too little too late, for those who have been advocating for such measures to be taken, it’s a relief that the fight has ended in victory. Meanwhile, back in New York, we see another case study of an artwork that became the site of self-harm in the Elmer Holmes Bobst library at New York University.

As the main library at New York University in Manhattan, the library was the site of 7 student deaths between 2003 and 2004, with the atrium being soaring levels of mezzanine flooring where the veranda-style barriers gave way to a higher and higher drop as the floors ascend. In response, the library erected barriers, but not just any barriers. NYU commissioned barriers that were aesthetically stunning, and work impeccably in tandem with the wider design of the library atrium, evoking ‘a digital waterfall’ of ones and zeroes that both safeguards visitors and gives a breath-taking visual effect, made entirely of randomly perforated aluminium screens.

Spanning the 12 floors of the architectural wonder, these screen-like barriers are proof that barriers need not interfere with artistic integrity, they can add to them, resulting in a safer experience that is – if anything – more artistically poignant, not less so. Physical barriers, as shown by studies such as Pirkis et al., 2013, as well as those published in the British Journal of Psychology, and in findings by the CDC, are effective in the reduction of harm and the prevention of tragedy, and in the case of the Vessel, there have been higher railings involved in the plan since the beginning. However, the minds behind the Vessel are still loathe to install these, and so, the Vessel will likely remain closed into perpetuity until such a time where these are effectively installed. Stuart Wood, the architect, said upon its completion that they ‘didn’t want to design in fear’; but perhaps some fear, some sense of responsibility towards the users of their art, would have been a very good thing, and would have allowed the installation of higher barriers that would have saved lives. In essence, when it comes to answering the above question of if architects and designers have an ethical responsibility to prevent harm to the users of their word, the Vessel has been an incredibly important case study in why the answer is – and always should be – a resounding ‘yes’.

The Risk of High Winds: How to Prevent Damage

More in Articles
6 Luxurious Home Decor Ideas You Should Invest in
26th July 2022
We use cookies and tracking through digital fingerprints on our website to give you the most relevant experience by remembering your preferences and repeat visits. Your information may also be used for personalization of adverts on our website. You can learn more about how we and our 194 partners collect and use your data by reading our Privacy Policy and Cookie Policy. By clicking "Accept All", you consent to the use of ALL cookies and tracking. You may visit "Cookie Settings" to provide a controlled (limited) consent.
Cookie SettingsAccept All
Manage consent