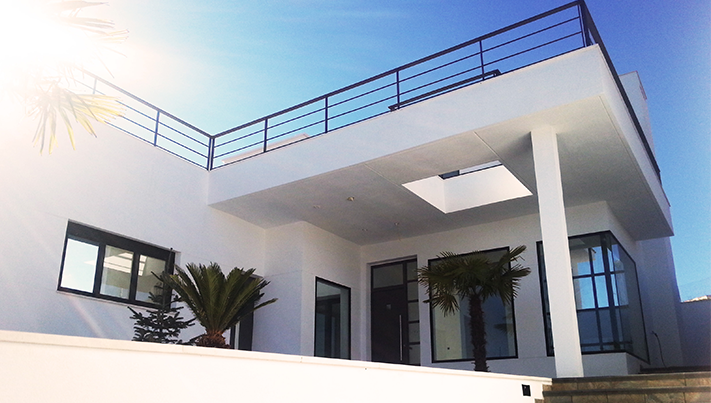 The architectural Studio of María Isabel Payer is based on Andalusia, Spain. Following the firm’s success in BUILD’s Design & Build Awards, we profiled María Isabel Payer to discover more about the innovative designs she creates for her clients.

The architectural Studio of María Isabel Payer is based in Andalusia, Spain. After fifteen years in business, it has developed a vast quantity of work in all fields, approaching new buildings, rehabilitation, patrimony, research works and development plans. Since the firm’s inception, the company has carried out more than eight hundred and fifty projects involving all kinds of usages such as mainly single-family but also multi-family dwellings homes, clinics and hospitals, funeral homes, commercial, industrial, sport and administrative buildings among others, besides important research works about the industrial patrimony of Andalusia published recently in a book and profound restoration and recovery works of the industrial patrimony of the Guadiato Valley region. In 2018 the European Association of Economy and Competitiveness rewarded her architectural Studio with the European Gold Medal for Work Merit.

Maria Isabel responds to the necessities of each and every one of her customers by providing them with the best architectonic solutions. This is one of the reasons why her creations are remarkable; how starting from some previous constraints, she has achieved these architectural spaced which in their own execution acquire a wide value.

On average, its works highlight as they project the spaces from the inner and to the open outside in their multiple forms to achieve the necessary transition and connect the buildings with their environment immediately, designing contemporary spaces, of great formal wealth, in contrast to the very fashionable current architecture where the external image is projected as a decorative layer and the inner spaces are deficient and are in the background.

In this way, María Isabel understands architecture as a space that is lived from the inside with formal and functional solutions and high-quality aesthetics, open and enlightened spaces to the outside where the natural resources as energetic sources are taken into advantage, running away from the closed and intrinsic spaces where the customers lose their relationship with the outside environment.

Among the works made within her architectural studio, some have been recognised in several contests. One of the projects includes a historical centre of mining in a patrimonial area from Peñarroya-Pueblonuevo (Cordova). Another one was a building of offices for the Town Hall in a town of Cordova called ‘Mirador Building’ due to its spectacular views of its environment, as well as its 6000 square metres of industrial building which have been bound together by a multitude of particular projects.

Among her projects, María Isabel includes religious buildings won through public contest such as a church of new building in Peñarroya-Pueblonuevo (Cordova), the refurbishment and expansion of an historical protected religious building dedicated to religion attached to an old hospital hermitage of Cordova. Nowadays, another building of religious nature is in project phase called the expansion of the Redemptoris Mater Seminar of Cordova. These buildings initially began with a designed idea of an “open building”. This concept invites citizenship inside and, at the same time, it opens to its outside as well as its borderline spaces – being in this case, one of the fundamental aspects is its integration with the main building in order to enrich it.

These buildings coordinate two defining elements and features, ones which will equip the building of an architectonical wealth based on the enjoyment and the experience of the spaces from the inside.

As such, the first element is the search of a current and functional building, where the space and light will prevail. The second element is the idea of establishing a dialogue and an architectural connection with the main historical building and nuances, which reflect and inspire the idea of the divine.

Formally, these buildings establish that dialogue between the architectural and the heaven, the divine, “the light” through elements of verticality being this one of the architectonic aspects, which defines the characteristics of the churches of the area.

According to the inner configuration of the inner spaces, there have been three fundamental and defining aspects: the light, the ventilation and the extent. It has been generated rooms of large extent always looking for a balance between the sensitive and the functional. Furthermore, these building stand out because of their utilisation of the natural resources to become buildings of high energetic efficiency, taking advantage mainly of the lighting, and the natural airflow.

Another remarkable project is the construction of the Ela Aviación Building, a factory in Spain committed to the manufacturing and selling of gyroplanes. This building has a contemporary image which stands because of its light and large extent of the spaces. It also combines a perfect conjunction between the department office, the customer service and the manufacturing areas. The double high entrance and the large glazed surface of the first floor obtain a complete perception of the total space which constitutes the building, offering a complete view of all the surface and enabling the control of that area in the different manufacturing phases.

Among her works, there are also multitude of housing projects which distinguished due to their high architectural value and their contemporary design offering. In the majority of cases, the optimal utilisation of the space and achieving the comfort and functionality of the rooms perfectly organised according to the necessities of the customer. Most of all, they are characterised for their neat design in the finishes and the conjunction in the usage of materials.

Looking ahead to what the future holds, María Isabel hopes to continue to build on the outstanding accomplishments that she has achieved over the years, especially following their recent success in BUILD’s Design & Build Awards where they were righteously selected as the Ones to Watch for Spain.

9
Share on FacebookShare on TwitterShare on Linkedin
Don't Miss It

3 Reasons To Hire An Arborist
28th October 2022
We use cookies and tracking through digital fingerprints on our website to give you the most relevant experience by remembering your preferences and repeat visits. Your information may also be used for personalization of adverts on our website. You can learn more about how we and our 194 partners collect and use your data by reading our Privacy Policy and Cookie Policy. By clicking "Accept All", you consent to the use of ALL cookies and tracking. You may visit "Cookie Settings" to provide a controlled (limited) consent.
Cookie SettingsAccept All
Manage consent