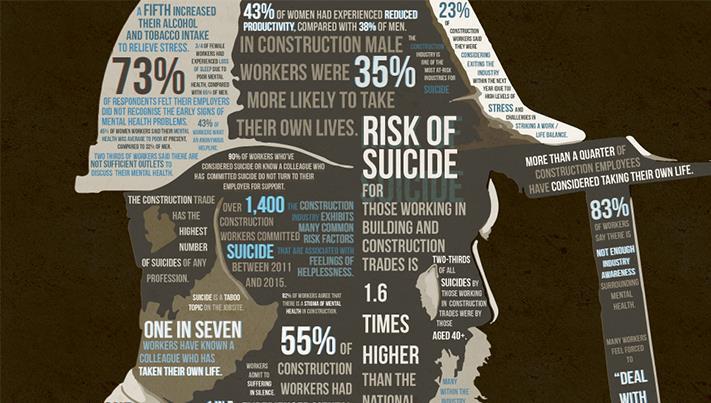 Over 1,400 construction workers committed suicide between 2011 – 2015.
Construction trades have the highest number of suicides of any profession.
Risk of suicide for those working in building and construction trades is 1.6 times higher than the national average.
More than a quarter of construction employees have considered taking their own life.
Workers admit to suffering in silence.
Many within the industry suffer in silence due to cultural expectations.
Many workers feel forced to “deal with it,” not seeking out the help they need, and symptoms get worse.

The stats surrounding mental health in the construction industry are so shocking that we thought it was important that we highlighted the issue.

The construction industry has the highest number of suicides of any profession with 1,400 workers taking their own lives over the course of only four years. One in seven workers knows a colleague who has taken their own life and many more workers have considered it. The risk of suicide for those working in the industry is 1.6 times higher than the national average, but what is the cause of this and what can be done to reduce these horrific figures?

Suffering In Silence
One big factor that jumps out of the many surveys that have been conducted around this topic is the fact that many workers have admitted to suffering in silence due to cultural expectations. They feel like they cannot talk about their troubles and that, if they did want to speak to someone about it, that there is simply nowhere to do so.

Normally if you are struggling at work you turn to your employer for help. However, in this industry, it doesn’t seem to be the case with workers stating that they would not turn to their employer due to “fear and stigma” of the subject and that as many as 1 in 5 say they felt their job would be at risk if they did so. It seems to be so bad that 90% of workers who’ve considered suicide or know a colleague who has committed suicide, do not turn to their employer for support. As a result, many workers feel forced to “deal with it,” not seeking out the help they need, and symptoms get worse.

It’s Not Just The Guys That Are Struggling
Women are finding it equally tough to cope with mental health issues too. 45% of women workers said their mental health was average to poor at present, with 43% saying they had experienced reduced productivity and 75% had experienced loss of sleep too.

So, How To Help Workers?
After compiling the responses from the multiple surveys on mental health in the construction industry, it’s clear that there are three main areas that need to be improved. The first is to have staff training to recognise early signs of mental health, as 73% of respondents felt their employers lacked this skill. Second is to raise awareness of mental health in the construction industry. A massive 83% of workers agree that there isn’t enough out there at the moment. This will also decrease the stigma of mental health. And finally, there need to be more outlets to enable workers to talk about their struggles. Two-thirds of workers believe this would help with another 43% asking for one of those outlets to be an anonymous helpline.

If you are struggling with a mental health issue there are many ways you can find help. Your GP will be able to make an initial diagnosis and point you in the right direction for further treatment. There are charities and third-party organisations that offer free help and listening services such as the Samaritans and SANEline. However, if you are more open about talking about how you are feeling, always talk to friends & family as they will know you better than anyone. Another route could be co-workers or your employer as they’ll be able to relate work-wise with your issues. Whichever options you choose, the first step is to just talk about it.

FROM LANDFILL TO LOGISTICS CENTRES

Future Predictions for Purpose Built Student Accommodation (PBSA) in the UK
22nd March 2019
We use cookies and tracking through digital fingerprints on our website to give you the most relevant experience by remembering your preferences and repeat visits. Your information may also be used for personalization of adverts on our website. You can learn more about how we and our 194 partners collect and use your data by reading our Privacy Policy and Cookie Policy. By clicking "Accept All", you consent to the use of ALL cookies and tracking. You may visit "Cookie Settings" to provide a controlled (limited) consent.
Cookie SettingsAccept All
Manage consent