Storm Pal Inc. was first established in 2006 and this year were awarded the Leader in Water Filtration and Maintenance, Ontario as part of the BUILD 2017 Business Excellence Awards. To celebrate, Gavin Swift, President and CEO and Darrin McMullin, VP Operations both provide a compelling insight into the firm’s remarkable Storm Water Interceptor (Canadian Patent #2,561,763 US Patent #7,314,549) product.

?Storm Pal Inc. has developed and patented the ‘Storm Pal Interceptor’ (SPI), which is designed to remove deleterious substances from storm sewer effluent prior to discharge to city sewer systems and receiving water bodies (refer to Figures 1a and 1b). The SPI has proven effective at removing debris and sediments, while substantially reducing the concentrations of petroleum products and total suspended solids present in storm water effluent.

The goal of Storm Pal Inc. is to enhance the quality of storm water effluent being discharged into streams, rivers and lakes to protect aquatic environments and preserve fisheries for future generations. The company currently has two offices in Thunder Bay and Ottawa, Ontario, Canada.

In nature, rainwater is used by vegetation to sustain life or filtered by the ground, prior to reaching outfall locations. However, in cases where natural filtration is not possible, as in the case of roads, parking lots and driveways, runoff enters storm water or combined sewer systems that eventually drains into receiving bodies. This water contains both sediments and impurities that impact water quality and destroy fish habitat. Within Canada, regulations concerning discharges to receiving water bodies are set by various government agencies such as Environment Canada, Department of Fisheries and Oceans, Ontario Ministry of Environment and Climate Change, as well as individual Municipalities.

Ultimate responsibility for establishing local storm water discharge guidelines rests with the municipalities in the form of by-laws. Municipalities are also responsible for issuing new construction permits, related to both commercial developments and sub-divisions, that demand the installation of storm water interceptor systems.

Consistent with regulatory requirements and recently issued municipal construction permits, Storm Pal Inc. has installed several SPI’s in various locations throughout Ontario including London, Ottawa, Windsor, Chatham and Thunder Bay. The company is now looking to expand operations to other cities and provinces within Canada, as well as the United States and overseas. As result, Storm Pal Inc. is actively seeking partners to assist with expansion of the firm, including investors, concrete manufactures and distributors.

1. Simplicity – The SPI is a duel chamber system that is constructed using standard manholes and piping. Initial treatment of the storm water effluent occurs within chamber #1, which is designed to capture any large particles and debris. The primary treatment chamber also removes a large quantity of suspended solids, as well as ‘free phase’ petroleum and grease that may enter the storm sewer system (refer to Figure 1a). The secondary treatment tank is a polishing chamber, whereby any suspended solids or deleterious material not captured by the chamber #1 is then captured within chamber #2 prior to discharge from the system.

2. Easy to install – Standard AutoCad drawings and specifications of the SPI are provided by Storm Pal Inc. based on the planned development. SPI’s are easier to install and maintain than other storm interceptors for the following reasons: a) Parts can be readily obtained from local pre-cast concrete company’s and plumbing wholesalers; 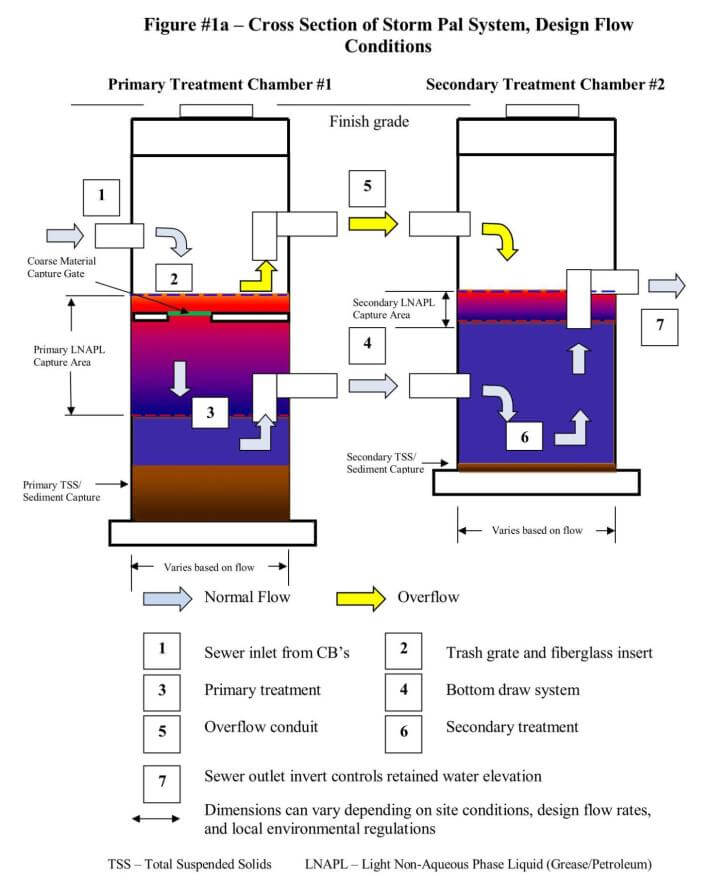 b) The modular chambers of the SPI are equal in weight and size to standard manholes and as such, no specialised heavy equipment is required for assembly; c) Contractors involved with the installation of SPI’s can assemble the parts as per drawings and specifications supplied by Storm Pal Inc. with relative ease; and d) The SPI can be modified to adapt tight fitting field conditions.

3. Effective at high flow – During extreme rain events, most competing interceptor treatment systems tend to bypass the treatment area. This means that during high flow situations, which typically contain the greatest amount of deleterious material, the water is discharged directly into the city storm sewer or receiving water body. In the case of SPI, the storm water systems are designed to treat up to a 10-year storm event at full efficiency. In addition, during greater than 10-year storm events, initial water treatment is still provided within chamber #2 of the SPI.

4. Lower maintenance requirements – Independent of the type of interceptor, the systems must be periodically maintained to remove deleterious substances and sediments that have been captured by the interceptor. Maintenance activities include routine inspection and cleaning of the capture mechanisms. In the case of the SPI, the systems are less prone to clogging due to the design.

In addition, the SPI continues to operate at maximum efficiency until the sediment level in chamber #1 reaches the depth of the pipe leading to chamber #2 (refer to Figure 1a). This is not the case for competing inceptor systems, where initial sedimentation can significantly influence future removal efficiency. Consequently, the SPI has lower maintenance requirements (i.e. frequency of clean-out) when compared to other treatment systems, and operates at maximum efficiency for a greater period. 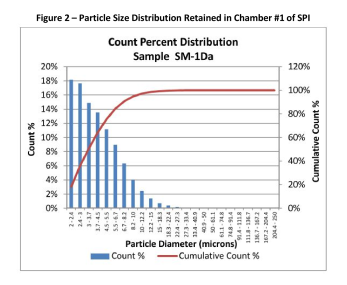 5. Cost effective – Purchase and installation of the Storm Pal system is typically 10 – 25% lower cost than other competing products. 6. Operationally effective – Storm Pal Inc. has been conducting in-situ testing of SPI units to evaluate the efficacy of the treatment system. Testing has involved measuring the concentration of total suspended solids (TSS) within chamber #1, chamber #2, and downstream of the SPI unit. General results indicate TSS removal efficiencies ranging between 81-98%, depending on the flow rate

(refer to Table 1). Studies have also been conducted of the particle size distribution of sediments retained within Chamber #1 of the SPI using a computerized digital image  system. These analytical results support the retention of fine clay and silt particles, high efficiency of TSS removal, and low scouring based on particle size distribution of solids that are captured by the system (refer to Figure 2).

As previously indicated, annual inspection and maintenance of the SPI is required for the system to operate effectively. The regularity of sand/sediment and heavy debris removal present in the bottom of each treatment chamber depends on the amount collected relative to outflow orifices (refer to figure 1). Any suspended oil and grease that is collected within chamber #1 should be pumped out prior to seasons with high precipitation.

The unique design of the overflow bypass system allows the system to continue working in the event the primary treatment chamber fills with sediment. Moreover, the SPI design can be easily adapted to accommodate difficult site conditions (i.e. minimal space) and varying geologic conditions. The storage capacity of both tanks can also be increased to handle larger flow volumes on an as required basis.

Finally, the efficacy of the product has been demonstrated by routine sampling of the storm sewer effluent upstream and downstream of the SPI’s. Thus, it is anticipated that SPI’s will be the primary choice for suppliers and contractors in the future, and as such, it is the expectation that Storm Pal Inc. will take the lead in the design, installation and maintenance of storm water effluent treatment systems. 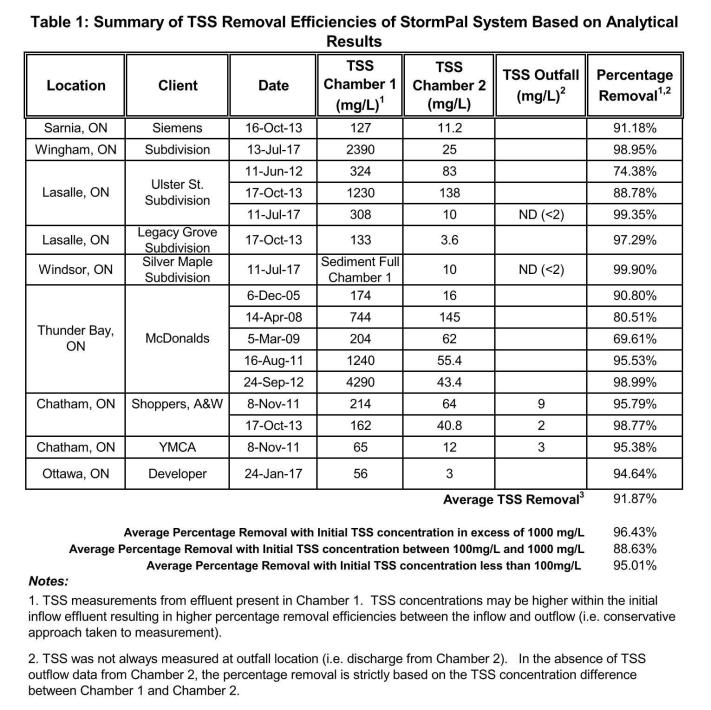 More in News
Is Time Running Out for Your Septic Tank?
8th January 2019
We use cookies on our website to give you the most relevant experience by remembering your preferences and repeat visits. By clicking “Accept All”, you consent to the use of ALL the cookies. However, you may visit "Cookie Settings" to provide a controlled consent.
Cookie SettingsAccept All
Manage consent