Built for the People 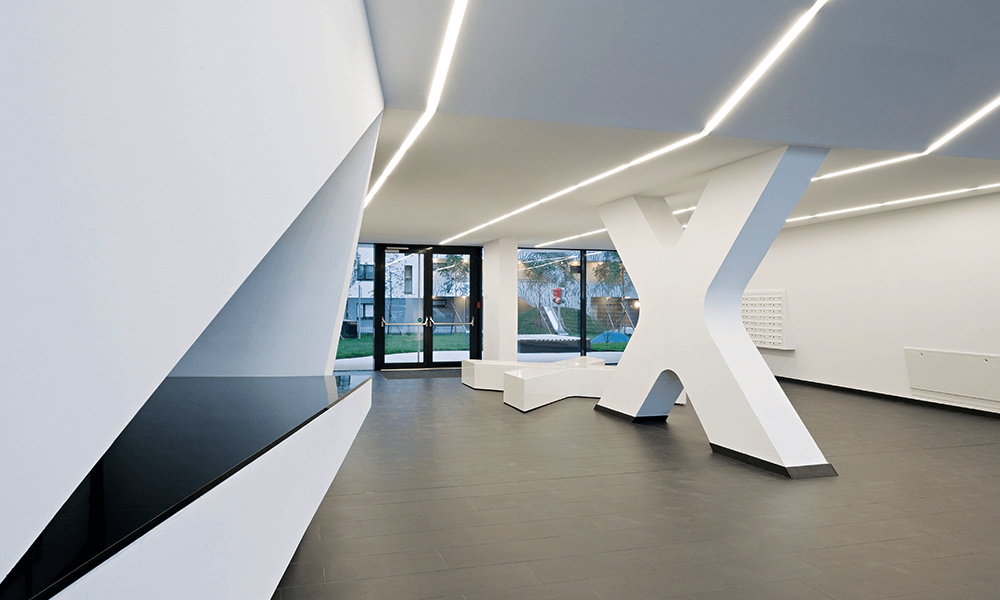 BKK-3 is an architectural company based in the heart of Europe, in romantic Vienna /Austria and was founded by architect Franz Sumnitsch – named herein as Architect of the Year – in 1999. All along from the first year BKK-3 starts with the planning of a prototypical project in collective housing called ‘MISS SARGFABRIK’. Completed one year later, this experimental project boosted BKK-3 into worldwide recognition. The award-winning architecture produced by Franz and his team sets new standards in social housing and especially in innovative common rooms.

BKK-3 is short for ‘Collective of Building Artists’, and the name is demonstrative of its comprehensive philosophy when approaching architectural discipline. For many years, Franz Sumnitsch has been working hard to create a co-operative atmosphere among his team so that they operation very much as a group.

‘Our ideas, drafts and plans are the subject of constant development,’ Franz says, ‘which is a result of our discussions about principles, new ideas, concepts and suggestions. Our strength lies in our ability to conduct informative and influential internal dialogue that helps us to uphold the quality of our building designs.

‘When developing new building designs, BKK-3 principally endeavour to create a kind of social architecture, which they achieve by weaving together expressive content with dramatic form. In doing so, they try to incorporate emotion, fun and life into an actual built reality.
By adhering to these philosophical guidelines, BKK-3 have realised social housing buildings, apartment buildings, offices, headquarters, student homes, retail areas, kindergartens, and event halls, as well as numerous interior design projects that required a certain bespoke quality that only they could provide. In the last few years in particular, the Collective developed an especial strength in urban planning solutions, like master plans for mixed use and urban districts, up to a size of 250,000 square metres.

Today, BKK-3 is a remarkable and innovative player in residential architecture across the innumerable variants that make up the European architectural industry. The company is now responsible for creating more than 1,000 flats in Austria and Germany, which are either already under construction or in the stages of planning.

Franz details the process that BKK-3 go through when approaching a new client. It is, of course, important for him and his colleagues to establish the firm’s intentions as honestly and professionally as possible, in order to best assure the client that their every need in the project is being handled sensitively.

‘Firstly, we aim to find out every detail of the content. For example, we example what the function of the completed project will be, as well as the sociological, ecological and economic aspects.

‘We are content-driven architects above all else, and we love to discuss the project without always having to stick to a particular, definite form,’ Franz adds, uncovering a new depth in BKK-3’s avant-garde approach to architecture. We are used to work with big groups of people, various stakeholders. In this case, you have to communicate and discuss every detail. But the point is, that planning with a group leads to better and innovative architecture. This process is essential for combing out weaker ideas, and it supports good solutions so that they stand a chance of becoming reality.

‘When we are working with a single client,’ Franz continues, ‘we are always asking for more participants to uphold the quality. The discussion continues where the individual is bound to stop thinking.

‘By anticipating the impossible, the arguments and various concepts presented by BKK-3 become more concise and focused. The desired objectives are clearly defined and tightly attached to solutions. Since their projects have gone through a process of fierce discussions and vigorous criticism, this means that they are not easily shaken once they leave the studio, and gives them a sense of a unified vision that, once fully coalesced, will offer up the direction in which to progress with a project, seeing it through until completion.

‘As these ideas have already undergone all conceivable criticisms in these discussion stages,’ Franz expands, ‘they are very difficult to challenge beyond that. The opportunity of making them become reality is tangible, and what is more, that is their own unique strength. This means that the client gets a strong project, with lot of qualities that represent the very best architectural principles and practice.’

Franz explains that he and his firm already have two quality standards for all of their projects. ‘The client should be satisfied – but in an analogous manner – as the eventual user of the building,’ Franz says. ‘For example, when we are doing freehold apartments, they have to sell quickly. That is the business model that the developer has adopted, and we support this with outstanding architecture and marketing pictures.

‘However, the user is the one that is going to be living there for the foreseeable future, and that means that we bear the responsibility for the long-term usage of the building. If both of these parties are happy with the building, it is by far the best way to measure our success.
‘In my opinion, it is all about true architecture, appreciation and respect for the needs of our partners. We consider it an enormous reward that our tenants can fully identify themselves with the building in which they live. As architects, we enjoy the benefits of increasing our knowledge about the real needs of those who are the beneficiaries of our designs. As a designer, one needs to be in touch if one wants to learn.

When reflecting upon BKK-3’s most successful previous endeavours, Franz refers to what he considers to be the most important such project: the collective housing project known as ‘SARGFABRIK’. Despite it being a somewhat morbid name, meaning ‘coffin factory’, Franz refers to the whole seven-year planning process behind it as being, in contrast, ‘very lively.’ An extraordinary building complex was formed, including flats, a kindergarten, a restaurant, an event hall, a seminar room, a garden, a telework chamber, a common kitchen, and of course a library and swimming hall, alongside a clubroom especially designed and build for teenagers, roof garden. A real prototyp of future living.

Critically, when designing these spaces, Franz makes it especially clear that there is not just one sole overall, all-comprehensive idea. To him, and to his colleagues, architecture means pouring in continuous work, and he recognises that something that is very important, even if it is not always easy, should be fun. ‘Only when fun and nonsense are given a chance can we work seriously,’ he surmises.

All fun and games aside, Franz’ kur key interest lies in the future of habitable dwellings, and overall in the future of architecture. The observance of technical standards, which he already considers to be minimum standard for professionals in this industry, such as lowest-energy consumption, low-temperature heating and healthy materials, will be complemented by the reflection of societal values. In addition, BKK-3’s overall strategy revolves around one factor of change: content. Pre-fabricated marketing ideas only provide short-lived impulses, and Franz instead believes that reality can only be transformed in a sustainable way if content and long-term programmes are provided. These programmes eliminate the concept of mere ‘sleeping units’, and create an interwoven pattern of dwelling, working and living. ‘We believe that this societal aspect is indispensable. Architecture without content and intention will degenerate into shallow design.

‘A new situation emerges when the dwellers agree upon organising the common area. It demands their own participation to maintain it. This results in a stronger reference to the house and a closer communication between the tenants.’

The big difference to other projects is participation, in Franz’ purview. A case in point are the sloping floors which account for approximately a third of the overall area. An ordinary developer would not have been prepared to take this marketing risk. There were five people in the group who were really enthusiastic about this experiment. And it turned out that it were this flats with the sloping floors which were rented out first.

This principle of participation heralded a new path in residential architecture. We learnt that this deep involvement of future users is the biggest chance for new architecture. All things being considered, the real-estate industry is, as Franz describes it, ‘a big immobile ship. Change is coming, to be certain, albeit very slowly. But let us first focus on the short-term outlook.

‘We have to differ in places, with real demand for housing, as is the case in most big cities across Europe. For example, Vienna has to integrate over 40,000 people annually. About 15,000 new flats will be needed each year. There is a robust market, and today you can sell or rent nearly everything that is build – such is the demand.

‘But, conversely, there are also other places outside of the urban centres, such as mid-sized towns, which have experienced the same strong increases in apartment prices within the last few years. If interest rates rise any further over the space of the next 12 month, this will mean that money will be drawn back from real-estate to instead be refocussed around stock exchange.’ Franz anticipates that a small-town bubble situation would be the result of this short-termism, and that could potentially be bad for not only the market, but also on a macro-economic scale.

But what will the future bring? Franz believes that BKK-3 will experience a rebound in social housing programmes in response to this squeeze. ‘Because of the difficult situation faced by tenants everywhere, the governments of these nations have to react now. Within the next few years, public institutions in Germany, France and even in the UK will need to be setting up a great number of new structures in order to be able to support affordable housing.’

What does Franz expect BKK-3 will be able to do to contribute to this alleviation of a shortage in housing, and the resulting squeeze on middle- to low-income families? ‘Of course, we have a lot of dreams floating around as to how we might be able to help,’ he says helpfully. ‘One is to work on futuristic space sculptures. For this to become more than just a vision, it is ideas that we need more than anything; big volumes of ideas, enough to fill a museum, a hangar or a skyscraper.’
The next dream that Franz expresses is to support nature with intelligent technical infrastructure and architecture. For example, he points towards a recent study conducted by BKK-3 for Dubai to change the air coolers in buildings from electrical power to natural cold deep-water. ‘A enormous waste of energy could end with this renewal energy solution,’ Franz asserts.

‘The final dream is more a wish, really, but one that I think still has much more than just an element of truth grounding it. We want to be constantly developing further, and we could also be collaborating with clients, in trust of our ideas.’