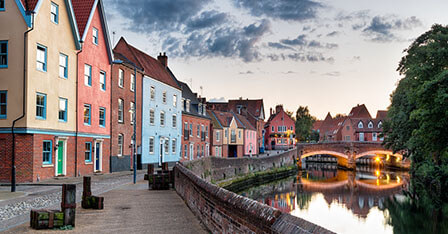 The UK’s specialist student housing developer Alumno has been awarded planning consent for a state-of-the-art scheme in the centre of Norwich. Norwich City Council gave the go-ahead on Thursday for The Quad, which will cater to Norwich students when it opens in September 2018.

Alumno is a property company which specialises in developing student housing. It was established in 2006 and works in partnership with universities, colleges and other key stakeholders to provide homes across major student towns and cities. This includes projects in Glasgow, St. Andrews, Birmingham, Norwich, Southwark (South London), Stratford (East London), Durham, Leamington Spa and Aberdeen.

Recently completed projects include the scheme at All Saints Green in Norwich, Postgraduate accommodation for St Andrews University, and Camberwell Campus, Peckham Road.

Alumno’s vision is to create communities that appeal to a diverse range of students, while providing both sustainable and affordable accommodation, and the new project in Norwich is set to be a major step forward for them in broadening their appeal.

The 244-bed purpose-built development has won support for regenerating the site of an old Mecca Bingo Hall, which has lain vacant for more than two years. The site has a colourful history, having previously been home to an art deco cinema and later the Gaumont Club, a music and entertainment venue where acts like The Rolling Stones performed in the 1960s. Unused since 2011 and demolished in 2014, this site is to receive a new lease of life under the new scheme, which will see the construction of five buildings ranging from 8 to 13 storeys above mixed-use ground floor.

There will be a full-time onsite management team provided by Derwent, who currently manage All Saints Green. Student wardens will be available by mobile phone out of normal hours, to address any issues of antisocial behaviour or safety.

The development has been designed to encourage energy efficiency and sustainable travel, with no cars permitted at the site or parked locally (with the exception of students with disabilities).

Norwich has a clear need for expanded student accommodation, with the City College, University of East Anglia and Norwich University of the Arts all projecting an expansion in their student numbers, estimated to reach 20,000 by 2018.

In addition, an economic impact report from Jeremy Leach Research Ltd concluded that additional spending in the local area by the 244 students will reach £1.25 million per year; accordingly, the value of the construction will be between £11 million and £14 million. Another survey, this one of Norwich City Centre retailers in July 2016, found that 20 out of 22 businesses felt that introducing more student accommodation, with a more direct link to the city centre, would be ‘good’ or ‘very good’ for their prospects.

The five-block development is the second Alumno development in Norwich, following the successful completion and ongoing management of a 220-bed scheme opposite the Bus Station nearby, which opened a year ago. Like that scheme, The Quad has been designed by award-winning architects Carson & Partners. Alumno were advised by local town planning consultants Brown & Co.

In addition to the accommodation, shared kitchens and communal areas, The Quad will deliver new business space and include a vibrant courtyard for residents. The development will be free from cars and have space for bicycle racks to support the pedestrianizing of the city centre, and is located just minutes from Norwich Bus Station.

The scheme will draw on Norwich’s heritage with public artwork celebrating the city’s little-known place in music history and commemorate the pioneering black entertainer, William Darby, who lived locally.

Darby, who was better known as Pablo Fanque, was Britain’s first black circus proprietor. Born at the end of the 18th century, but orphaned at a young age, he joined the circus as an apprentice and worked his way up to start his own show and become a celebrity of the Victorian era. Almost a century later, John Lennon saw a poster from his circus and included the lyric ‘Late of Pablo Fanques Fair, what a scene!’ in the song Being for the Benefit of Mr Kite!. The song appeared on the Beatles’ Sgt. Pepper album.

The Quad will feature a specially-commissioned sculpture of a circus acrobat to mark Fanque’s story, along with a poetry wall relating to him, his circus and his link with one of the most influential acts in musical history.

David Campbell, Managing Director of Alumno Developments said: ‘We are delighted to have secured the green light to build The Quad and continue our investment in Norwich city centre. There is a clear need and demand for more student accommodation in Norwich and this is an exciting project to add to Alumno’s growing portfolio of high-quality, purpose-built university accommotation.

‘This development will regenerate a vacant site and help bring new vibrancy to this area, while also celebrating the contribution of a pioneering figure in entertainment and the long legacy he had on British culture.’